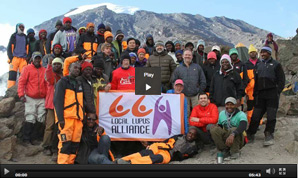 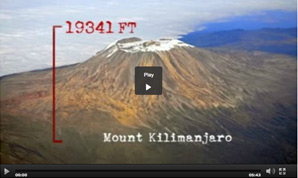 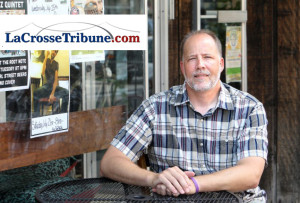 Richard Chrz had finally gotten his health on track. Once 300 pounds, he lost nearly a third of that. He started running. And running. He participated in races that spanned up to 100 miles. Then, he was diagnosed with lupus. Chrz didn’t see the local support he wanted, so he started the Local Lupus Alliance. It’s a resource for newly diagnosed patients to get information about the autoimmune disease. “I’m inspired to do this,” the Stoddard man said. “If no one else will do it, it means I will. … If there’s one gift I was given, I’m noisy.”

The alliance, which is not affiliated with any other lupus organizations, works to create awareness and educate people about the disease. It’s a place for patients to talk to others with lupus and a source for accurate information about lupus and resources to find assistance. “I want to do the work so someone else doesn’t have to,” Chrz said, who spent hours online doing research after his diagnosis. “We want the person who gets the next diagnosis not to have to do all that,” said his wife, Renee.

Lupus isn’t talked about much locally, said Dr. Douglas White, a rheumatology physician at Gundersen Lutheran Medical Center. “A lot of people go most of their life without hearing about it,” he said. “But when they do, they get limited information. They rely on friends and family and the internet, which is not always right.” Once the lupus diagnosis is handed out, so are a lot of informational pamphlets and some verbal and hand-written doctor comments. Sometimes, though, hearing the word lupus is so traumatic, most of the information isn’t absorbed, White said. Some people just turn to the internet, which can provide a narrow scope of truth. “We aren’t good enough with getting information out to patients as physicians,” he said. “We need to be better.”

In Chrz’s case, it all started with a sore knee. At first, his doctors attributed the pain to the long races he ran. After physical therapy and some tests, nothing got better. A blood test in July 2010 showed it was lupus. Chrz wasn’t too concerned with the diagnosis at first. His mom had it, so he figured he could deal with it, too.

Then things got worse. It was February 2011 when it really hit: the double vision, tremors, joint pain, headaches that lasted for months and electric shocks throughout his body. It took Chrz three days to mow the lawn because of the extreme fatigue. Confusion sometimes set in and he would forget how he ended up in places. Treatments ranged from chemotherapy to almost 180 pills a week.

Today, Chrz seems to be in remission. He even ran a 15-mile race this month — his first since September 2009. With the Local Lupus Alliance, Chrz wants to give a presence to lupus patients — something he says has been lacking in the area. “There’s no voice for (lupus) here,” Renee Chrz said. “It doesn’t have a name that people know. We’re trying to bring a name to it. A lot of people don’t know enough about it.” In its first year, the alliance will provide awareness and information. There will be fundraisers and brochures set up in medical centers.

“There’s a tremendous need for reliable patient information for this,” White said. “There are national organizations for this, but those resources are limited so they focus on bigger areas of the country.” That’s Chrz’s mission. Just to speak up. “It helps me feel like I’m not just sitting here with a disease,” he said. “I’m doing something instead.”

The name Debbie Brague may sound familiar to you. She hosts midday programs on WLXR, Magic 105 radio station. She is also the operations manager for the La Crosse Radio Group.

Brague’s schedule can be grueling—nine- to ten-hour days starting at 5 a.m. each weekday. On weekends, she often represents the La Crosse Radio Group at charitable events. She shows up with sound equipment, music and quick-witted commentary to help good causes, like Riverfest, the La Crosse Area Family YMCA and the Boys and Girls Clubs. Her colleagues call her “the Energizer Bunny.”

“I love my job,” Brague says. “I work with great people, I try to make our listeners’ days go better with music and I help out in the community at special events.”

The picture of health
Tall, thin, with dark hair and a dimple in her right cheek, Brague appears healthy and fit. She walks two flights of stairs to get to her work area, works out at the YMCA three or four times a week and hauls sound equipment to events, in addition to her duties at home.

But early in 2011, she noticed that her body hurt. “One day it would be my right knee, ankle and neck,” Brague relates. “The next morning, those areas would feel fine, but other joints and tendons would be painful. It got worse as each day wore on. If I sat down to watch TV at night, the pain would get so bad that I could hardly get up to go to bed. It just didn’t make sense.”

She kept a diary of her symptoms. When she took it to her primary health care provider, she was referred to a rheumatologist at Gundersen Lutheran Health System.

“The specialist, Dr. Carol Danning, took a thorough history, then ran a battery of tests and blood work,” Brague explains. “I learned that I might have some kind of immune disorder. I had the flu over Christmas, so she thought perhaps the virus was still hanging on. She prescribed steroids for the inflammation and pain, with the goal of resetting my immune system.”

Brague’s condition improved with steroids, but her blood work didn’t. “I was shocked to learn the reset hadn’t worked,” Brague says. “And when I first heard the word lupus, I didn’t know what it was. It sounded like something awful, like leprosy.”

Lupus is far more common in women than men. “The first episode most often occurs in their childbearing years. There is no known cause, but a lot of theories posit genetics and hormones as components in the process,” Dr. Danning says.

After months of pain and worry, Brague had a diagnosis and a treatment plan. Now she had to begin the transition from seeing herself as a healthy, active woman to one living with a chronic illness.

She felt tested mentally as well as physically. “At first, I worried, ‘What will happen tomorrow?’” she says. “Not only to my body. I was concerned about my family—my husband, Paul, our daughters and granddaughters. Internet searches overwhelmed me. They talked a lot about skin rashes, which I didn’t have. Finally I decided I had to go into this with open eyes and open arms.”

Living with lupus
“Lupus is not a disease you hear about all the time,” Dr. Danning says. “Patients have to deal with a lot of unknowns—the disease itself and the treatment. It often takes three to six months before someone can begin to have confidence that, yes, they have a chronic illness, but it can be controlled,” she explains. “Outcomes have improved in recent years. And I am excited that Gundersen Lutheran has been involved in clinical research studies of treatment options for people with more severe symptoms.

“It can take a while to find the right treatment, but most patients are able to do almost everything they did before they were diagnosed,” Dr. Danning concludes. There is no cure for lupus. The goal of treatment is to control the symptoms.

Brague’s regimen includes a combination of drugs and lifestyle changes. She takes Plaquenil, an antimalarial drug that also treats autoimmune diseases. “I’ve improved my eating habits, cut down on caffeine, made sure I get to the Y and am working on getting adequate sleep,” she reports.

Brague is feeling better now, but still gets tired. She decided, in true Energizer Bunny fashion, to combat her fatigue with activity. “Lying around is not good for me physically, mentally or emotionally,” she says. “I fight my midafternoon fatigue by working out at the Y or getting busy around the house.”

Creating the silver lining
Through social networking, Brague found another person in our area living with lupus. “It’s been wonderful exchanging emails with someone who has been where I am,” she says. “He’s been a real inspiration. We’ve decided that there needs to be more awareness about this mystery disease called lupus.”

Within two weeks of connecting through Facebook, they began laying plans for a fundraiser, probably in 2013, to do just that. “Special events are what I do,” Brague says. “I know a lot of people who can help us make this a super event. This will be more personal, and I realize it might be a little uncomfortable. But it will be worth it if it helps others in our community dealing with lupus.”

Last summer, Brague had trouble setting up equipment at events. But now, “I am celebrating the fact that I can set up my own stage and speakers again. I am planning to do a 5K run in May at the Festival Foods La Crosse Fitness Festival,” Brague says. “And I look forward to spending time with my granddaughters this summer. These goals help me stay as strong and healthy as I can.

And if the lupus does flare up, I will be in much better shape to deal with it. I am not letting this diagnosis get me down. It doesn’t scare me anymore.” Some people look for a silver lining in tough transitions. Debbie Brague is creating hers.

The Local Lupus Alliance is proud to share the fir...

The name Debbie Brague may sound familiar to you. She hosts midday programs on WLXR, Magic...
Deb Brague

Richard Chrz had finally gotten his health on track. Once 300 pounds, he lost nearly a thi...
Richard Chrz