How the Local Lupus Alliance started

If you knew Richard Chrz prior to his Lupus diagnosis, you would know that he spent much of his life as an athlete. Swimming, endurance running and other outdoor activities like hunting, boating and fishing were a big part of his life. Running 100 miles was a thing he truly enjoyed and looked forward to the training.

Late in 2009, Richard had some nagging knee pains that he just could not get past no matter how hard he pushed. He started going to his primary care physician, who was also a sports medicine doctor. His doctor was quick to point out that running those types of distances would, most certainly, cause pain. Richard was convinced this was NOT from running. 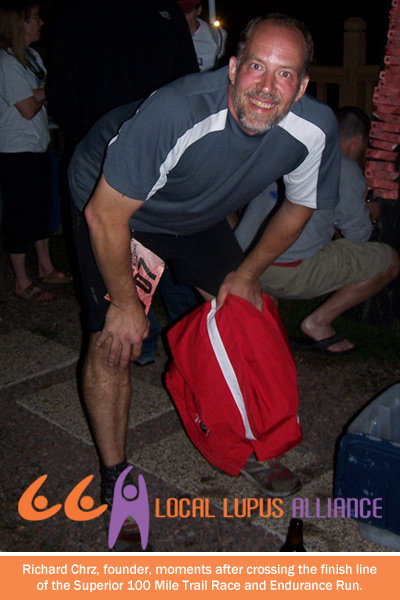 After more than a year of various doctor appointments and testing, trying to stop, or at least reduce the pain with no success, his doctor did a rheumatological blood draw. It was approximately June 2010 that he was referred to a Rheumatologist. It was at his July appointment with the Rheumatologist that they discussed the possibility of various markers from the blood tests pointing to lupus. Now he had the markers pointing to the disease, a family history (his mother had been dealing with lupus for several years already), and also now, the symptoms of lupus. (His symptoms included central nervous system activity-memory loss, confusion, difficulty focusing, tremors, a burning and electricity feeling throughout his body including his brain, vision problems, difficulty walking, severe joint pain, extreme fatigue, headaches and various other symptoms. At one point he was taking 100+ pills a week including an anti-malaria medication-plaquenil, high doses of prednisone, immune suppressant medication-cellcept, and methotrexate-a chemo drug. He also underwent six months of cytoxan which is another chemotherapy medication that is done in the hospital through IV. He continues to struggle daily with symptoms and flares of the disease, but is currently on a much, much lower amount of prescription medication.) Although, he has not given up hope that he will someday pick up where he left off running, for now, he settles for helping others who experience the same struggles he has because of lupus, and where the story of Local Lupus Alliance begins.

In 2011, Richard and his wife, Renee, decided they didn’t want anyone else to go through what they had, and decided to set up a local lupus organization to raise awareness in the surrounding areas. They made several attempts to reach out to various national and regional lupus organizations through phone and email. They were left with little answers and a lot of frustration. 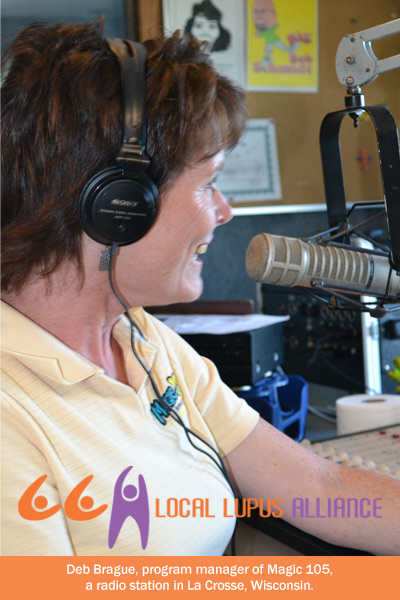 In 2012, Deb Brague, the program manager with Magic 105, reached out to Renee through social media. Deb had seen posts Renee had made regarding her husband’s diagnoses. Deb had been newly diagnosed herself, and wanted to connect, in hope of learning more. She too, wanted to see how she could be part of making a difference for other patients struggling with their own diagnosis and to help patients find credible information. She also wondered if there was any sort of support group in the area. They had all met in one capacity or another previously, so there was a quick connection. They felt by coming together they could make a real difference in the lives of patients, and in the lives of their families and friends who cared about, and for them.

In 2012, they reached out to friends and family and were able to come up with enough funds to file for their non-stock, not-for-profit INC. filing with the IRS. The cost to do this was approximately $550. They hired an attorney and created the Local Lupus Alliance. They didn’t waste any time raising funding, that same year, they held a very small, grassroots style 6 Hour Run/Walk with no advertising, and no financial sponsoring, so that they could figure out the logistics of an event such as this. They figured this would help them in planning for 2013. Between their running contacts, friends and family that cared about them, they were able to raise $1,988, with expenditures of $956.

In 2013, they expanded the Goosebumps 6 Hour Run/Walk, added sponsorships and a small amount of media exposure, still trying to keep it somewhat small, as to be able to limit the instances of failure as they continued to slowly build the event. They also held their 1st annual Murder Mystery Theater at the Weber Center in La Crosse WI. The combined 2013 fundraising brought gross revenue of $19,188 and expenditures of $11,030.

2014 brought great things. The Local Lupus Alliance was officially approved for its 501c3 status. They also invited area professionals in who have vast medical, business and/or nonprofit knowledge to create the first Local Lupus Alliance Board of Directors, together they are busy planning their events, creating their Compassionate Care Program, developing support groups and continuing their mission to grow awareness and help others with lupus.

To learn more about the board, please visit our Board page. To get involved or read more about our fundraising events please visit our Events page. We hope to see you out an an event and thank you for your interest in supporting the Local Lupus Alliance.

The name Debbie Brague may sound familiar to you. She hosts midday programs on WLXR, Magic...
Deb Brague