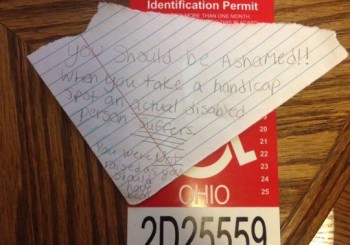 Harley Jo Skorpenske, who has Lupus, found this note on her car windshield in a CVS parking lot.

One Ohio State University student’s quick trip to a Cleveland, Ohio, CVS prompted her outraged mother to post an open letter on Facebook appealing for people to understand that just because an illness isn’t visible doesn’t mean it’s not there.

“You should be ashamed!” read the note tucked onto Harley Jo Skorpenske’s windshield. “When you take a handicap spot an actual disabled person suffers. You were not raised as you should have been.”

The issue wasn’t that Harley didn’t have a handicap parking sticker — she did — but that the person who wrote the note didn’t believe she had a disability because of her ability to walk in and out of the store unassisted.

However, what wasn’t visible was the 20-year-old’s intense battle with Lupus, a chronic autoimmune disease that at least 1.5 million people in the United States battle on a daily basis, according to the Lupus Foundation of America.

The effects of Lupus can be debilitating, leaving those who suffer from it with agonizing pain throughout their skin, joints and internal organs. Despite the pain, many sufferers go through their daily lives without showing any obvious external effects.

In response Harley’s mother, Corinna Skorpenske, wrote the letter and posted it, along with a photo of the scribbled note on Facebook.

“To The Person Who Left This on My Daughters Car,

Wishing so much for you to have stopped and talked to this amazing person before leaving this. If you had, you would have known that my daughter has a disease. Since she was 16 years old, she has been suffering from LUPUS. Basically, her immune system thinks her body inside and out is something bad and attacks it. It started with her joints swelling and the pain being so bad she could hardly walk. But she continued going to school and keeping up with her community service.”

Corinna goes on to describe the intense challenges and pain her daughter has faced over the years since her diagnosis, including hearing loss, multiple collapsed lungs and constant pain, along with a month-long hospital stay that forced her to drop out of college for a semester.

“She struggles every day with permanent damage she has had to one side of her body and with hearing loss, but baby she keeps going!” Corinna continued in the letter. “…Many people suffer with these ‘GHOST’ diseases, which you can’t see but are just as bad as a physical disability.”

“My first reaction was anger,” Corinna tells Yahoo Health of how she felt after Harley told her about the note. “On top of everything she deals with she didn’t need this. Harley is very strong, and many times she just lets it go. But because she is human I know she feels something.”

Corinna says her daughter’s positivity through the pain and desire to help others inspired her to do her part to educate people about invisible illnesses like lupus, depression, Crohn’s Disease and fibromyalgia.

“Harley is very passionate about disabilities of all kind and I knew I needed to do this for her,” Corinna continues, adding that she’d like to find the person who left the note so she can see why it’s important to not “judge a book by its cover.”

“People with ghost illnesses are often labeled as lazy or fakes,” Corinna says.

“We never know what burdens people struggle with. Often we are so quick to judge or make assumptions, but if we just take the time to ask them, they are often very willing to educate them on it. Their pain and discomfort is real.”